Polynesian tattoos are a distinctive form of tribal tattoo art, originating from the Polynesia subregion of Oceania.

These designs are closely tied to the tribal cultures and traditions of Polynesian islands.

Although to the untrained eye they may look like random patterns focused solely on aesthetics, in fact, every element of a Polynesia themed tattoo carries specific symbolic value. 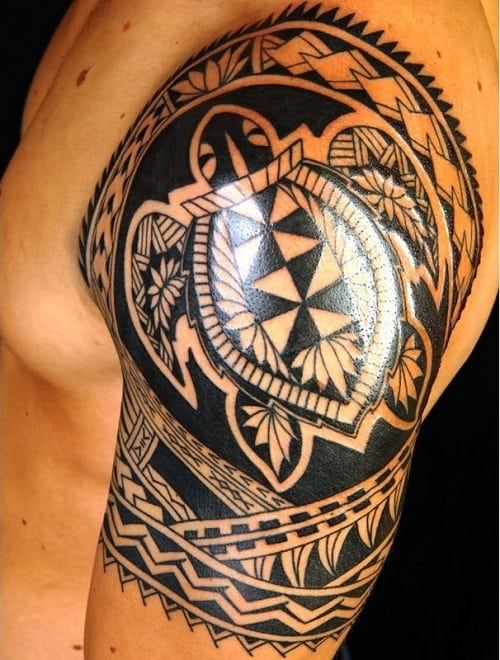 The history of tattoos in Polynesia goes back over two thousand years. The art of tattooing was considered a sacred practice and the process of getting a tattoo involved a ceremony with a series of rituals.

Only individuals who have passed a set of rites were permitted to get a tattoo, which would often signify their position and ranking within the local society.

Tattoos were, therefore, a mark of adulthood (which was reached at the age of 12) and of particular achievements, as well as being a sign of courage and strength. 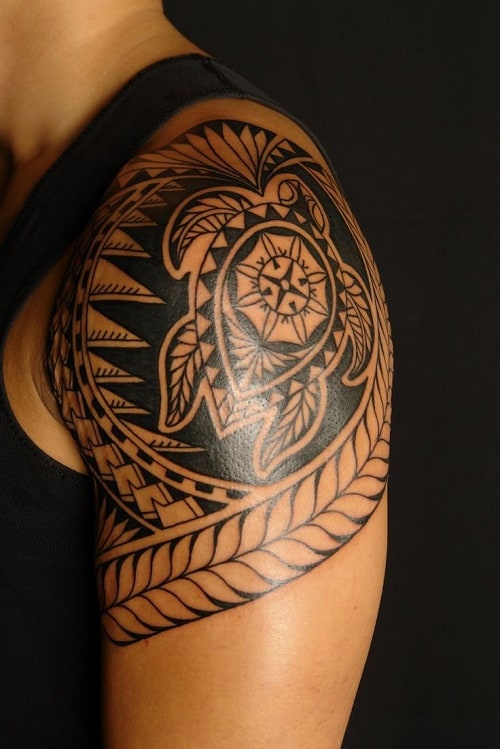 The process itself was a painful one since tattoos were done using crude equipment such as bamboos and animal bones.

This resulted in long, painful healing and high risk of infection – standing as a further testament to the individual’s courage and ability to withstand physical pain.

According to some sources, the word ‘tattoo’ actually originates from Polynesia.

Captain James Cook, who was the first navigator to attempt to explore the Polynesian Triangle in the late eighteenth century, learned about the practice of tattooing while visiting the islands.

Allegedly, it was he who introduced the word ‘tattoo’ to Europe, as he brought back with his tales of the tribal tattooing ceremonies. 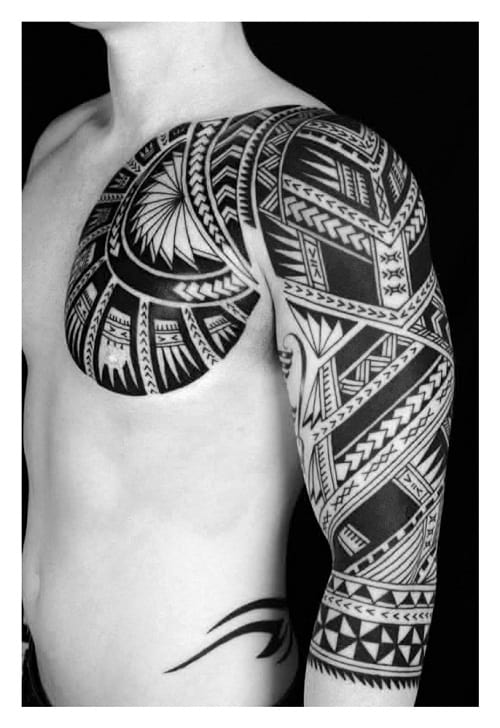 Polynesia is made up of over 1,000 islands which, although sharing highly similar culture, language, and customs, are still distinct societies with minor differences and defining features.

Tribal tattoos across Polynesian islands were therefore largely similar, though some differences in style and significance appeared.

It is believed that the first tribal people of Polynesia came to the Marquesas Islands and it is from here that they spread to various other Polynesian Islands.

As such, tattoos were an important part of the culture of the Marquesas Islands and they were specifically borne for aesthetic purposes, as well as marking the rites of passage through different phases of life. 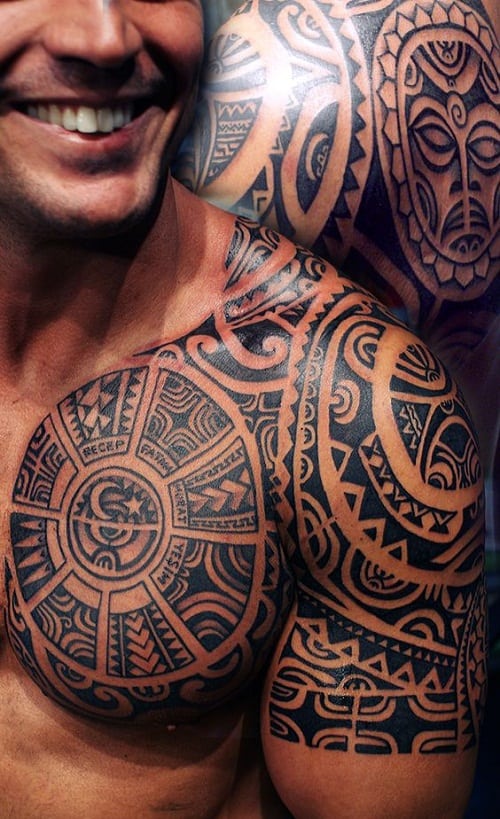 In Hawaiian culture, tattoos were considered to be more personalized in nature, with respect to the fact that they conveyed a meaning related to the bearer.

Another purpose of tattoos in this culture was that they were considered to be protective talismans, and sometimes a way to honor a deceased loved one.

In Samoa, tattoos were meant to signify the social status of the bearer. The tattoos were large and intricate, narrating everything about a person, from his age to his social standing, rank and place in life.

Getting them inked was a matter of great pain and endurance as they were ink with the tooth of a pig or shark rather than a needle. 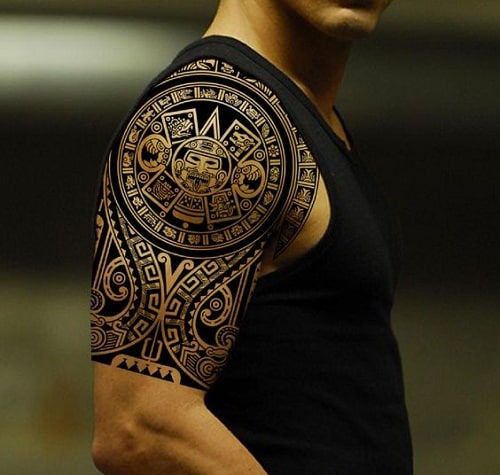 It was essential to have the tattoo completed once it was started, otherwise, it was a matter of disgrace for the tattoo bearer.

The Samoan tattoos for men were big in size reaching from below the rib cage to the ankles, and they are called pe’a. On the other hand, the feminine tattoos (malu) were large in size but lacked the black areas.

Most of the Samoan women have tattoos inked on their hands.

New Zealand is inhabited by the Maori tribe, famous for the unique style of tattoos. The designs comprise of spirals and each design is modified as the bearer passes through a new stage in life.

Tattooing involves a series of rituals during which a design is changed with the passage of time – it may take many years to attain a complete look. These tattoos stand for courage, strength status and passion of the bearer. 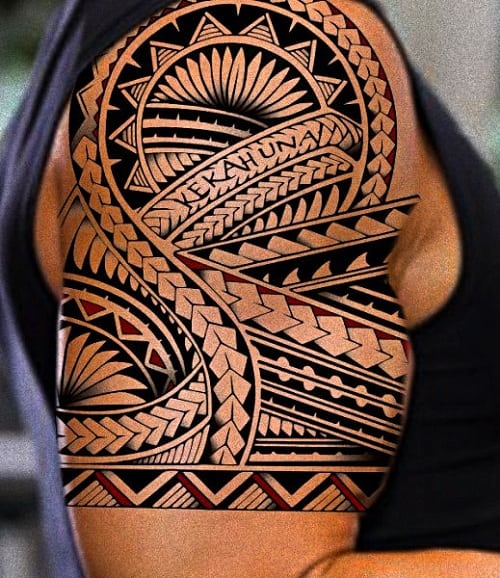 Tahiti is also known by the name of French Polynesia and in this island, only people of high social status had the right to get tattoos.

These tattoos were spread over the entire body of the bearer, with the exception of the face area.

Both men and women had these tattoos and they symbolized the passage of various stages of human existence.

In the culture of the Easter Islands, it was believed that the body of a person becomes sacred once it is marked with tattoos.

Part of the belief was that tattoos were a necessary prerequisite to be able to communicate with the divine.

The most common design constituted a series of dots and lines extending from one ear to the other, covering the forehead of the bearer. 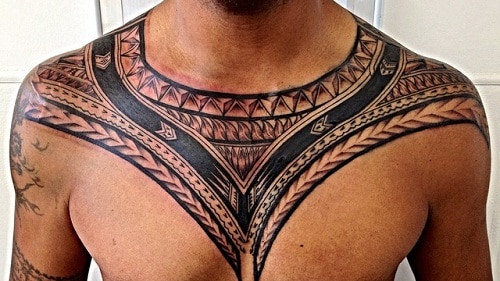 Tonga tattoos are very similar to Samoan tattoos in the respect that they had a story to narrate, including personal facts about the bearer such as his age, social status and his journey through life.

Cook Islands tattoos comprised of large designs which covered the entire body of the bearer.

Tattoos signified a person’s belonging to a specific tribe since each tribe had its own designs and markings.

Polynesian tattoos can generally be split into two categories:

However, it’s important to know that each element used in a Polynesian themed tattoo design has its own meaning and significance – the patterns are made up of a series of meanings, rather than holding a singular meaning as a whole.

The enata is a symbolic representation of a human figure and appears in Polynesia inspired tattoos either on its own or as part of a pattern (multiple enata symbols in a linear formation).

The symbol can represent a female, male, or divine figure and, unsurprisingly, hold meanings related to humanity and relationships. When placed upside down, enata symbolizes a fallen enemy.

When enata appears in the form of a pattern, it looks like a group of people holding hands – a row of enata in a semi-circular formation often represents the sky and the ancestors guarding their living relatives.

Shark teeth appear in Polynesian tattoos as triangles – often as part of a pattern, as a row of interlocking triangles.

In most Polynesian tribes, this symbol stands for protection, strength, and guidance – in some, it’s also connected to the idea of adaptability. 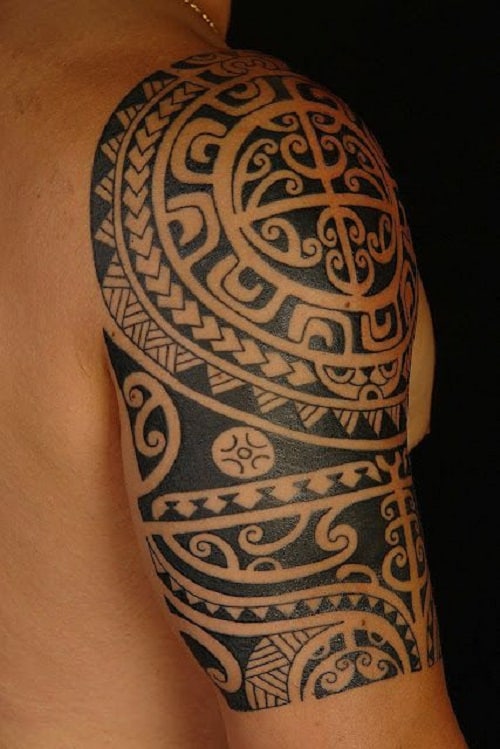 Again, the spearhead can either be represented as a singular symbol or as a row of interlocking spearheads forming a linear pattern.

Spearheads symbolize strength and courage in battle; when part of a pattern with multiple spearheads pointing in the same direction, the traditional meaning is that of defeating the enemy.

Depending on the specific design, ocean waves can either take a curved form or be simplified to angular lines.

Since the ocean plays such an important role in the lives of Polynesian tribes, it’s unsurprising that as a symbol, it stands for a number of meanings. The key ones include life, continuity, changes, and the afterlife.

Check out more ocean-inspired tattoos in our guide.

They are also believed to guide the dead to the afterlife – this last meaning is expressed in Polynesian body art through the image of a turtle with a symbol of a human on the turtle or next to it.

Like other symbols used in Polynesian tattoos, turtles can also be represented in the form of a linear design – this is achieved by drawing on the shape of the turtle’s shell pattern.

Across Polynesian islands, lizards – particularly geckos – are believed to be powerful creatures who can bring both good and bad luck, both life and death. They are also thought to be messengers between humans and gods.

The stylized pattern of the lizard symbol is highly similar to that of enata, or the symbol for a human. Some sources suggest that the reason for this is that in Polynesian myths, gods and spirits often appeared to humans in the form of lizards.

Stylized tribal stingrays don’t appear in Polynesian tattoo art very often. When they do, they primarily symbolize protection – since stingrays are able to hide from sharks and other predators in the sand, they are associated with safety and adaptation. Secondary meanings behind the stingray include gracefulness, agility, speed, and stealth.

Tiki, associated primarily with Hawaii, are statues with human figures carved into them. They represent the ancestors and the protection they provide. In Polynesian based art, tiki are usually circular and almost always depicted with their eyes closed.

Alongside Polynesian symbolism lending meaning to tribal markings, the placement of the tattoos holds its own significance. There was some variation between the different tribes of Polynesia, but in general different placements on the body had the following meanings:

These placements can be used to highlight the meaning of the symbolism already present within the design itself – for instance, Polynesian tribal tattoos meaning strength will be best suited for shoulder or upper arm placement if you’re going for a full traditional set of meanings.

Still, although taking these traditional placements into account when planning your Polynesian tattoo is a great idea, you should, of course, consider your personal preferences first and foremost.

As with any type of tattoo, it’s also important to remember that the more intricate the design, the larger the placement area will need to be to accommodate all the details without compromising on quality. 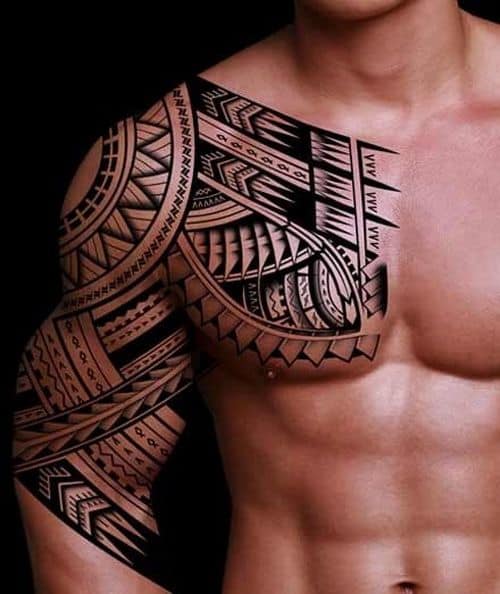 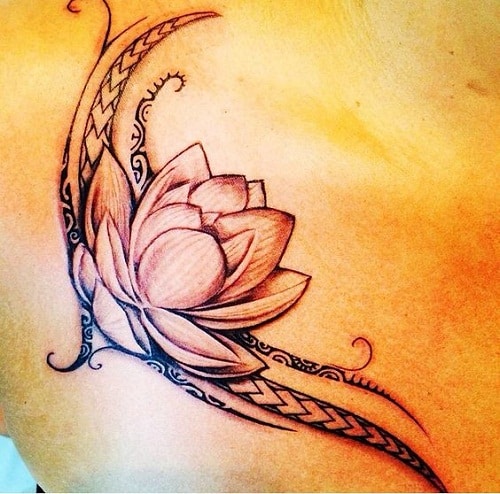 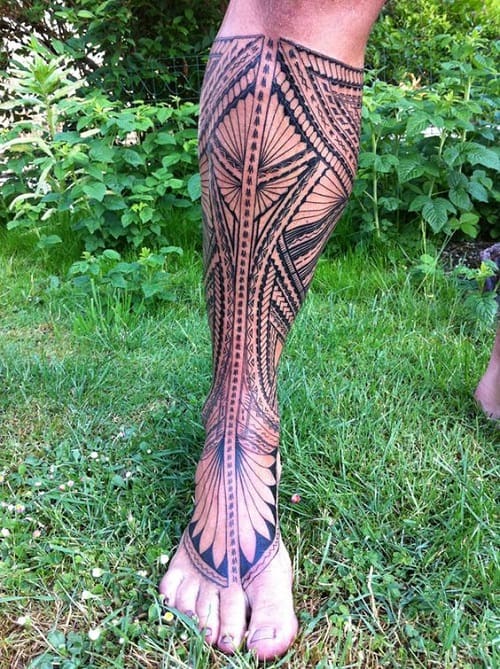 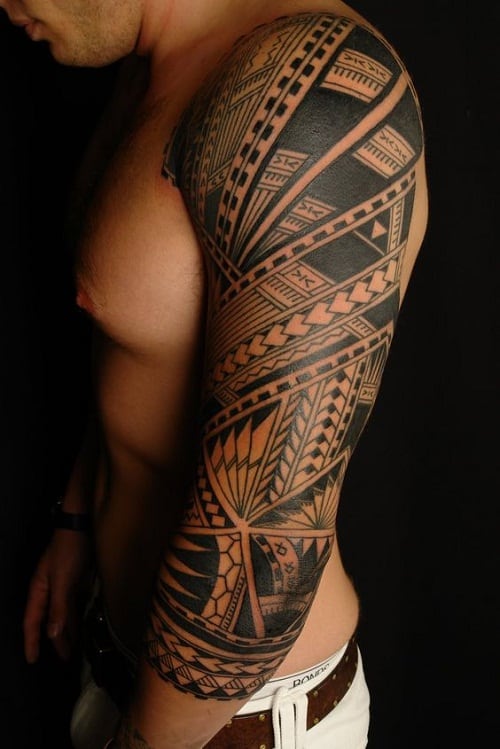 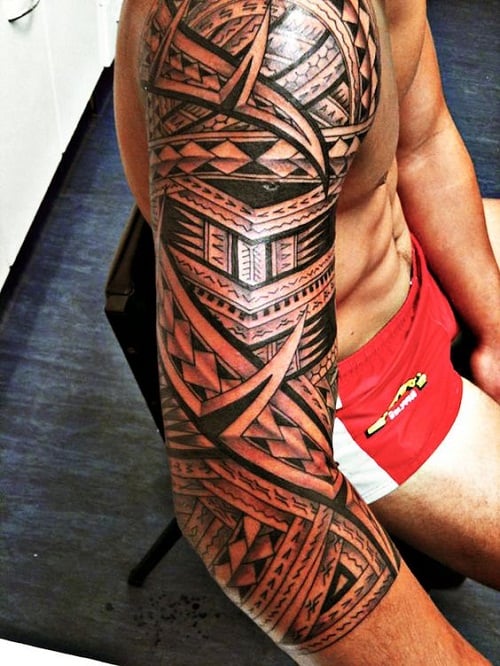 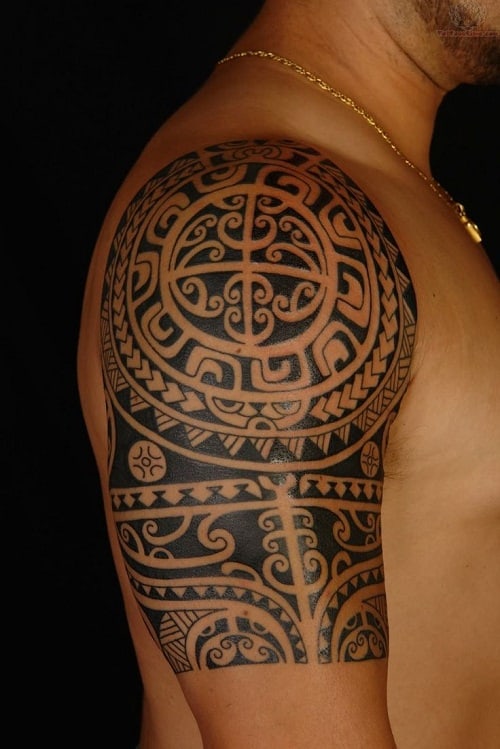 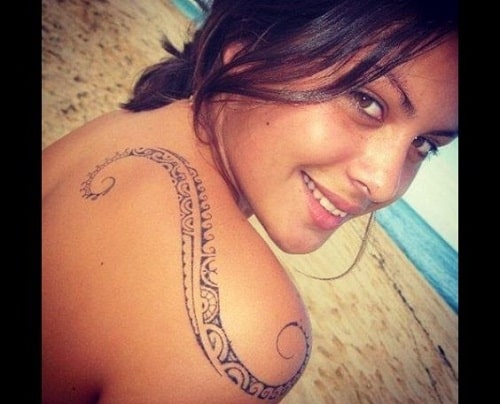 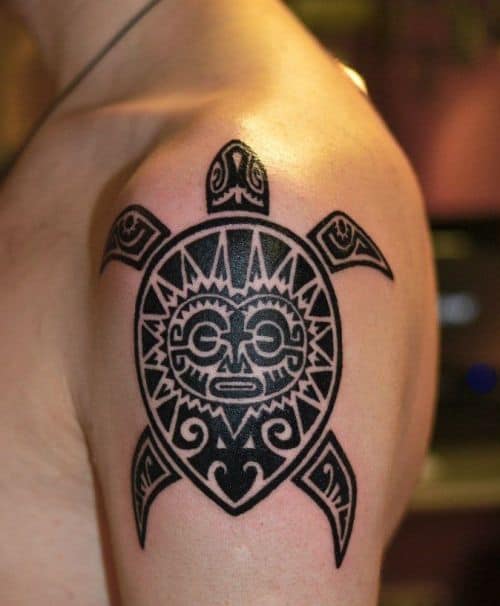